Wet Paint - One Step at a Time!

Wow, where to start to talk about the last month!  First off, the workshops were phenomenal!   I wasn't able to make it to the Helper Workshop which I was so sad about, but I heard from many that it was a blast (just as I figured!  ugh!  I knew I was missing out!)  Got some great feedback from some students.  In fact, Vern Schwarz wrote a great blog about his Helper experience which you should check out . . . as soon as you're done reading mine, of course, and Jordan Wright, a student from Utah State University said it was the best decision he'd ever made.  "I learned more from him in one week than I have in over a year in college studying painting!"  One thing that Jordan said that everyone really agreed on was the fact that Doug is so willing to give you his entire process, "step by step, beginning to end, without holding anything back."  He posted some great paintings on his blog from the workshop, including a great value study of an alley in Helper.  The students loved watching the demonstration paintings.  Here are some of the finished demo paintings, some of which you will see the "process" pictures of!
Oh, just a side note, when Doug sent me these images, of course, he had to title them before he could save them . . . so yes, he has come up with some very clever names for these . . let's start with the first one.  "Demo 1" hmmm, whadaya think?  Got a nice ring to it, doesn't it?  I'm tellin' ya, the man's got a gift for namin' paintings!  The guy's a walking thesaurus.
Okay okay, I know most of you support Doug in this, just like you all supported the ugly t-shirts, and, yes, his gift of painting far outweighs his gift of "titling" so . . . I'm going to let these names slide.  This time.
"Demo 1"
9x12 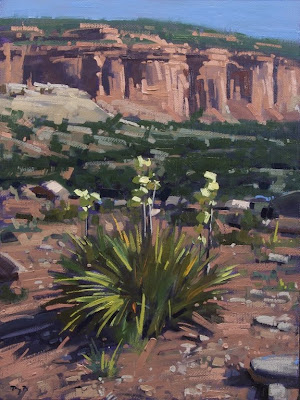 Sand Creek Road just outside of Torrey.  I would have named this flowering something or other.
"Demo 2"
8x10 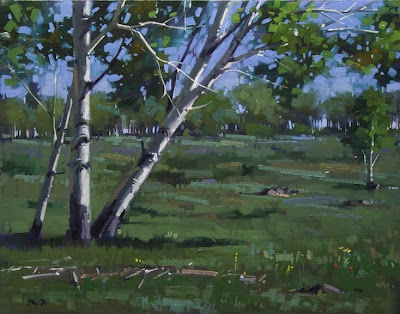 Boulder Mountain meadow.  Gotta love these quakies.  In the fall, the colors are absolutely breathtaking.  If you haven't been to Boulder Mountain, seriously worth a trip!!
"Demo 3"
8x10 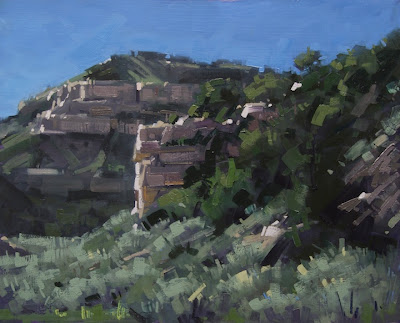 Hillside outside of Helper
"Demo 4"
8x10 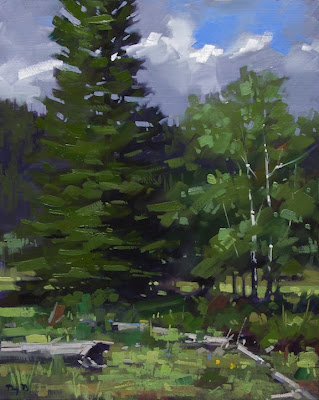 On the mountain between Boulder and Torrey - more on the Boulder side.  The clouds were constantly changing.  Got some great shots of Doug working the sky.  He makes it look so easy.  But it's not!  Trust me.  I know.
"Demo 5"
8x10 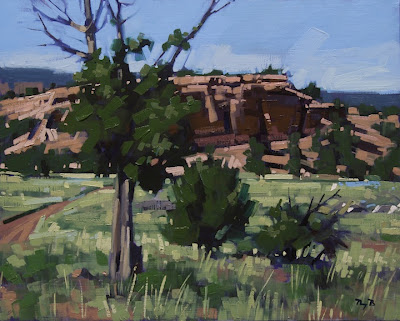 Outskirts of Teasdale I believe - I missed this one.  Again, love how he captures the heat of the day.
"Demo 6"
8x10 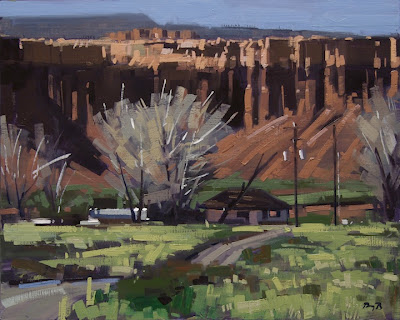 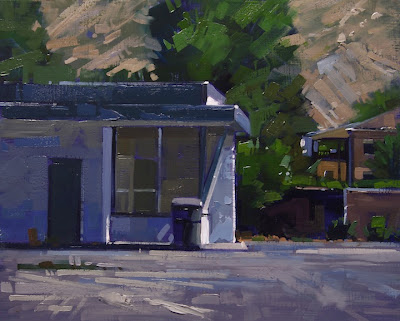 Vern posted this one on his blog, at midpoint I believe.
Okay - so I did make it down to the Torrey workshop and guess what??  I actually did a painting one morning!!  The students asked if I painted.  I said NO!  Never had a paintbrush in my hand.  So they kept on me until I consented to paint the next morning.  So with easel set up and brush in hand, I attempted to paint a red rock and a tree!  Doug seriously makes it look so easy but it's not!  To all of you painters out there from all of us non-painters, I drop my messy paintbrush at your feet and grovel!
Jeanette's First Painting
8x10 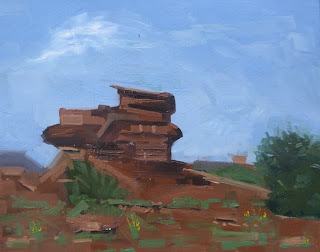 Yeah well, it was fun anyway!!  If there are any strokes in this painting that look like Doug's confident strokes, they probably are!  It needed help and he came to my rescue! 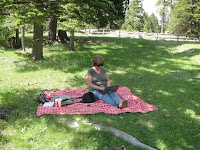 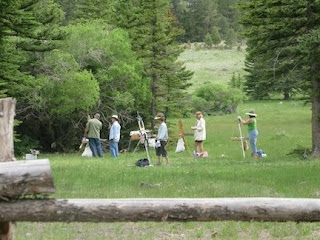 Okay - so let's go back to the meadow where I spread out the red checkered blanket.  The meadow was beautiful and peaceful.  There were hawks in the distance that were not very happy about us invading their space!


Doug started the demo painting with the dark purple "wash" that generally kinda freaks people out and then proceeds to "draw" the painting out with such tools as q-tips or a paper towel!  This is where he puts in the values of the painting.  The lighter areas, the darker areas.  It's a great exercise. 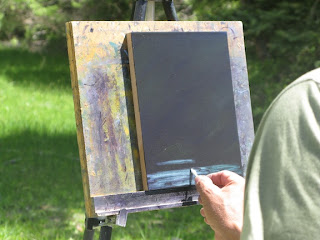 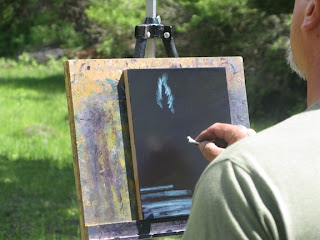 After he got the painting "drawn" in, he then talked about the two different kinds of color matching--the first being "absolute color" which is matching the paint to the subject, i.e. tree, sky or grass.  The students below are color-matching the paint on their pallet knife with the subject. 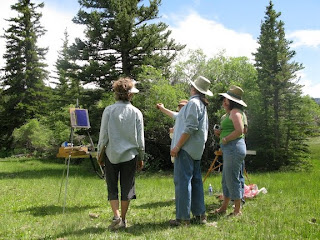 The other type of matching is "relative color" looking at what's on your painting already and see if tree next to it is lighter or darker, relatively speaking!  You're seeing here that I'm truly understanding the concept, right?!!  So below is a series of the painting "Demo 7" (clever), going from the "drawing" stage to the signature at the end! 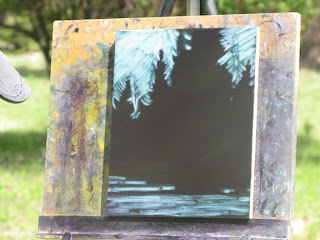 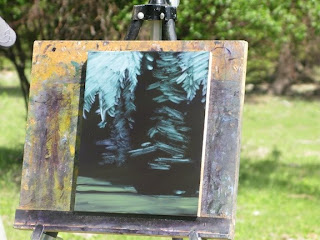 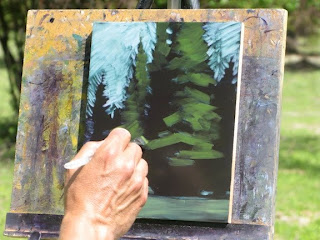 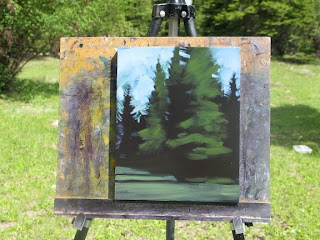 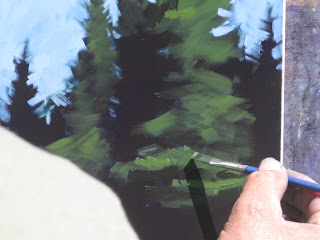 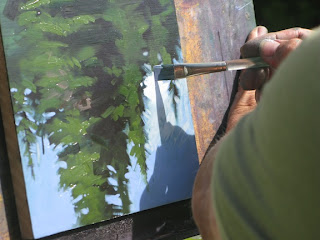 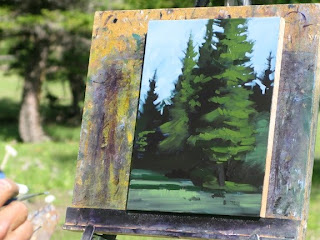 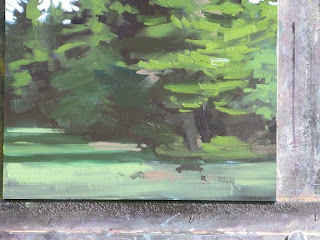 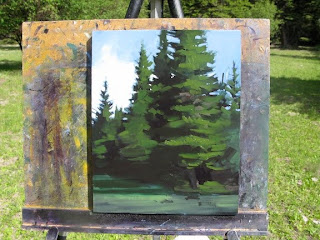 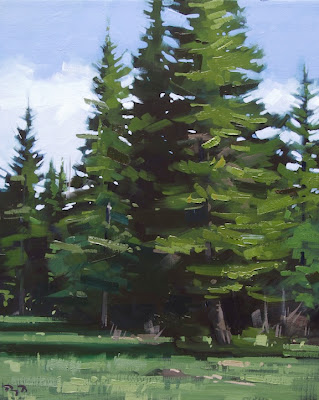 Finished and signed.  Doug B.
So many things intrigued me, especially after I attempted to paint.  Everything from the soft edges, to the clouds, to the trees.  Doug explained, on my "painting" I'll use that term loosely that I was trying to paint the sage brush individually, rather than looking for "shapes" or "blocks" or color.  He used that same comparison in painting the pine trees or sections of grass.  I realized we see much less detail than we think we do.
Hope you enjoyed the process paintings . . . I have more!  I will do another one next week.  I will also have more workshop pictures on our website along with links to Vern's and Jordan's blogs!
Oh, and on a final note, when I asked about the "brown" color, I was kindly "educated" that "there is no such color as brown!"  Pffff!!  Whatever!!  I'm certain there is a brown crayon in my crayola box . . . just sayin . . .
Big BIG thanks to the students this summer!  It was fabulous to meet you!!  I am looking forward to meeting more students in September as there is one more workshop in Helper!  September 27 - October 2.  #good.times.in.helper!! Below are some more pictures from the workshops!
Thanks for your patience in waiting for this blog - my apologies!
Warmest regards,
J'net 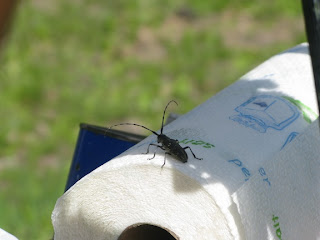 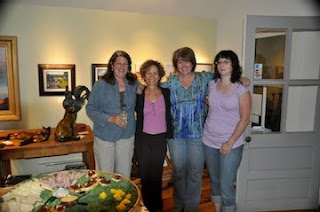 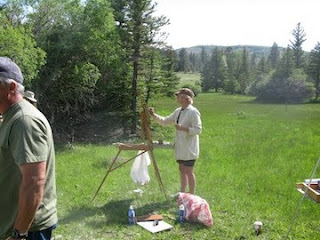 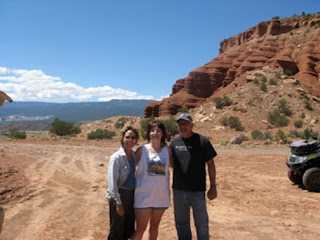 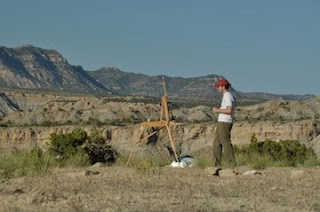 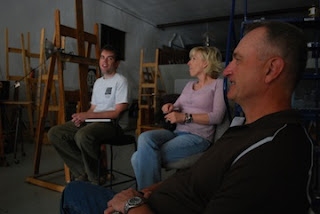 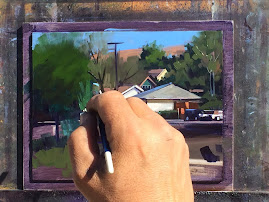